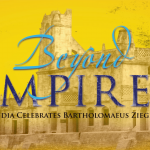 Follow on Facebook how colleges, libraries, organizations and friends are making “Beyond Empires” available to their communities. And hear what the following have to say about the film:

From The Christian Century: “As both contemporary Tamil scholar Daniel Jeyaraj and British missions scholar Andrew F. Walls affirm during interviews in the film, Christianity is not the culture-destroying invasion so many assume it to be; again and again it has proven to be an active force in preserving cultures. Right in the face of aggressive empire, Ziegenbalg affirmed, protected, and promoted indigenous Tamil culture, for gospel reasons. At the same time, on account of the same gospel, he sought to remove and suppress those elements of the culture that opposed human dignity and flourishing.” —Rev. Dr. Sarah Hinlicky Wilson

From Authors: “For years it was thought that Christianity was a western religion, and that the rest of the world had their own faiths. In the last twenty years, people in Europe and the U.S. have been thunderstruck to discover that Christianity is growing at a rate 7-10 times faster than the population in Africa and Asia, and that it is even beginning to spread  in places like India. The new centers of Christian strength are going to be in the non-western world, and that may be the most powerful history-changing force in the world during the next couple of centuries.  In other words, the missionary movement of the 18th and 19th centuries, has changed the course of history in a way that is completely unlooked for. How did this movement begin? What kind of people were its pioneers? In this previously untold story, we find how it really began.”   —Dr. Timothy Keller – Senior Pastor: Redeemer Presbyterian Church, New York City.

From Christianity Today: “This whole tale unfolds in Gilbert’s new and beautifully wrought documentary ‘Beyond Empires: Why India Celebrates Bartholomaeus Ziegenbalg.’ From period illustrations of missionaries baptizing converts to black-and-white footage from a 1931 reenactment of Ziegenbalg’s landing; from vignettes of Ziegenbalg (played by Mark Stevick) with voiceovers from his journals to interviews with mission scholars; and above all through interviews with contemporary Indians testifying to their affection and gratitude toward Ziegenbalg, this is a story that needs to be seen and heard and retold. It captures mission at its best and gently teaches lessons that privileged Western Christians needs to hear.” —Rev. Dr. Sarah Hinlicky Wilson

From Scholars: “This film retrieves from the sands of time an amazing story.  Anyone who wants to deepen their grasp of the history of Christian missions and Western Christian engagement with global cultures ought to consider viewing and pondering it.”  —Dr. Tal Howard – Director: Center for Faith & Inquiry at Gordon College, Wenham, MA.

“The documentary is significant for correcting the general view of the history of Protestant missions in India.  More practically, it recognizes Ziegenbalg’s mission methodology.  South India has the largest number of Christians in India, largely because Ziegenbalg set a pattern of holistic involvement that addressed people’s social, economic, and spiritual needs.  The gospel he proclaimed and implemented gave both hope and dignity, and people eagerly responded to the work of the Holy Spirit in their hearts and lives.”  —Rev. Dr. Herb Hoefer – Missions Chair: Concordia University, Portland, OR