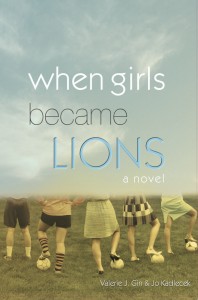 The incredible championship of the U.S.A. Women’s Soccer Team at the June 2015 FIFA World Cup confirmed the sport’s popularity and the growing impact of women athletes as role models. Now comes a novel that continues the celebration of both: WHEN GIRLS BECAME LIONS.

Co-authored by Valerie J. Gin and Jo Kadlecek, both former college athletes and coaches, WHEN GIRLS BECAME LIONS is a tale of two teams, Title IX and the women who became champions—and friends—in the process. It is a unique literary contribution to both women’s fiction and the ordinarily male-dominated sports genre as it celebrates women’s friendships against the backdrop of sport history. Now available in print and e-book through any independent, chain or online book seller.